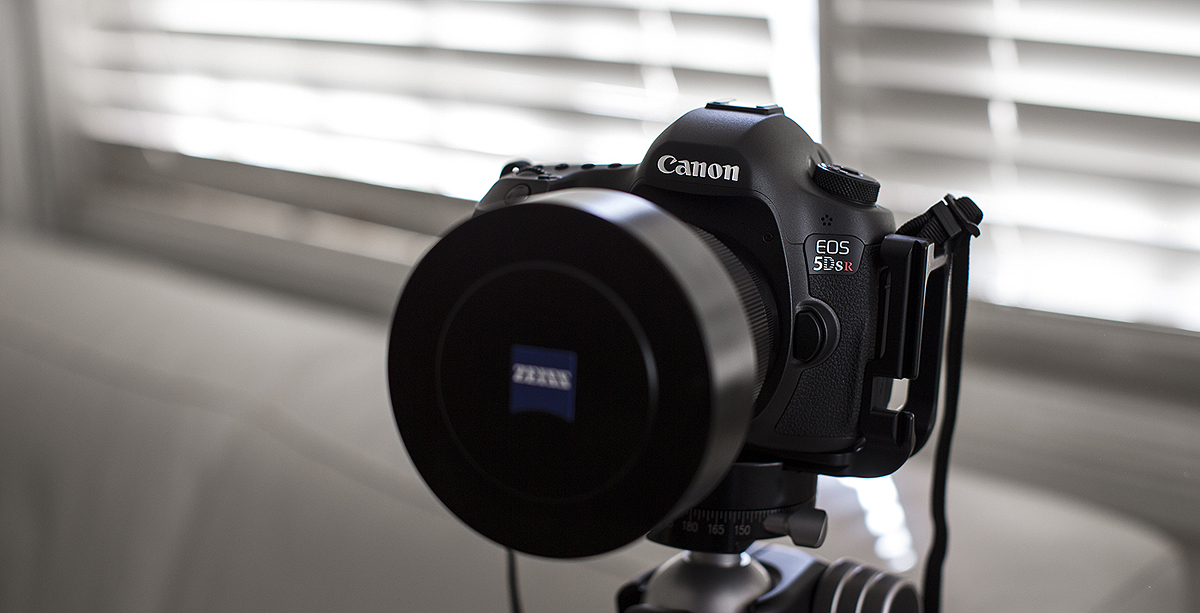 We have been using the Canon 5DSR for the past 2 months, and now feel that we have had sufficient time behind the controls to adjust to the subtle changes required in both image capture techniques and post production, to maximize the true potential of this high megapixel camera. Although our main landscape cameras have been the 18.1 megapixel 1DX, and the 20.2 megapixel 6D, we have also been using the 36.3 megapixel A7R on many shoots over the past two and half years. As we have previously reviewed here and here, we particularly like the high dynamic range of the Sony, and the extra resolution it has, particularly with excellent lens such as the TSE 24mm f3.5L II and the Zeiss ZE Distagon 15mm f2.8. It is an ideal body for landscape photography, that can fully utilise and maximise the sensor’s higher resolution and detail, when teamed with a good manual focus lens.


There are some drawbacks with the A7R though compared to the Canons. For landscapes, we prefer the colour and balance of the Canon RAW images, and the better weather sealing of the 1D bodies. In the rain, the A7R stays in the bag. For non landscape photography, the autofocus with non FE lens is slow and cumbersome, and the frame rate is too slow. For portraits, focus peaking can be used, but it is of little use in sports photography. However, the A7R remains a great landscape body, with wonderful portability and versatility, particularly in conjunction with the TSE 24mm f3.5L II and a Zoerk rear shift adaptor.


Our use of the A7R has allowed us to come to terms easier with some of techniques required to get the most out of the Canon 5DSR. At 50.6 megapixels, it offers the highest resolution of any DSLR on the market currently, and rivals the resolution of medium format cameras from only a few year ago. With such resolution, focus is critical, with even marginal mistakes being greatly magnified. Fortunately, the AF system on the 5DSR is superb, and it is as good if not better than the 1DX, which is really designed as sports and wildlife camera. It’s a little wasted for what we do (manual focus landscapes), but it would be invaluable for portraits and in the studio. It has a 61-point high-density reticular AF system with 41 / f4 and 5 / f2.8 cross-type points. Even though the AF and AF tracking (AI servo) is quite brilliant, the slow frame rate (5fps) prevents the 5DSR being a true sports camera. We have found the best and most efficient method to nail the focus while on a tripod is live view with 6X and 16X magnification.


Apart from focus, we have also found that the higher resolution sensor is especially unkind on any minor movement. Previously with the 1DX on a RRS tripod and head, there was no detectable movement blur at the beach or in shallow surf. On our recent shoot with the 5DSR at a central coast beach, we noticed movement blur at 16X magnification on the LCD screen, which was eventually eliminated by better anchoring the legs in the sand and adding weight to the tripod.


One of the main reasons for our purchase of the A7R in 2013, was that Canon did not offer a high megapixel sensor camera, which was important for us given the size of the images we print. Most of our orders are for 1m or greater prints. That the A7R was compatible with our Canon lens was a significant and deciding factor. So what are our thoughts now that the Canon 5DSR is here?


To summarise, we feel the advantages of the 5DSR over the A7R for landscape photography are:


1. Higher megapixel sensor
2. Compatible with all our existing lens without the need for adaptors
3. Better weather sealing
4. Superior Colour rendering and processing
5. Superior Ergonomic control / layout (although this may be just familiarity)
6. Optical viewfinder (vs EVF)
7. Superior Live View controls (including real time RGB histogram, superimposed level)
8. A more responsive shutter, with minimal lag. The soft touch electromagnetic shutter is a revelation and will be a major plus for birders and wildlife photographers. We’re sure Canon will introduce this to the rest of the range especially the 1DX II, where the muted soft shutter will be in stark contrast to the Gatling gun nature of the current 1DX.

The advantages of the A7R are:

With the imminent release of the 42.4 megapixel Sony A7R II, and its back illuminated sensor, there is a sense that Sony will gain an even greater advantage in dynamic range over the 5DSR. There already have been published reviews highlighting this, particularly when pushing shadow details. This is a typical test from the On Landscape website


We must admit that this has never bothered us with our landscapes taken by the 1DX or 6D. When the dynamic range is too great, we bracket. We rarely use filters anymore. We also don’t deliberately underexpose and bring up shadow details, which is what occurs in many of these tests.


With this is mind, while at Somersby Falls on the Central Coast, NSW, I sought out a scene with a large dynamic range. I set up my tripod in the shadows under a rock ledge, and composed a scene that included bright sunlight, light reflecting off the waterfall, and dark shadows under the ledge. I used the RGB histogram to get the best one shot exposure I could. The image details are Canon 5DSR, Zeiss 15mm f2.8, ISO 100 to achieve an exposure of 8 seconds. The screenshot is from a 27” iMac retinal screen, operating Adobe Camera Raw 9.1.


The first image is that of the unedited RAW image with the histogram revealing some minor clipping of both highlights and shadows. The dynamic range is clearly greater than that of the 5DSR sensor. 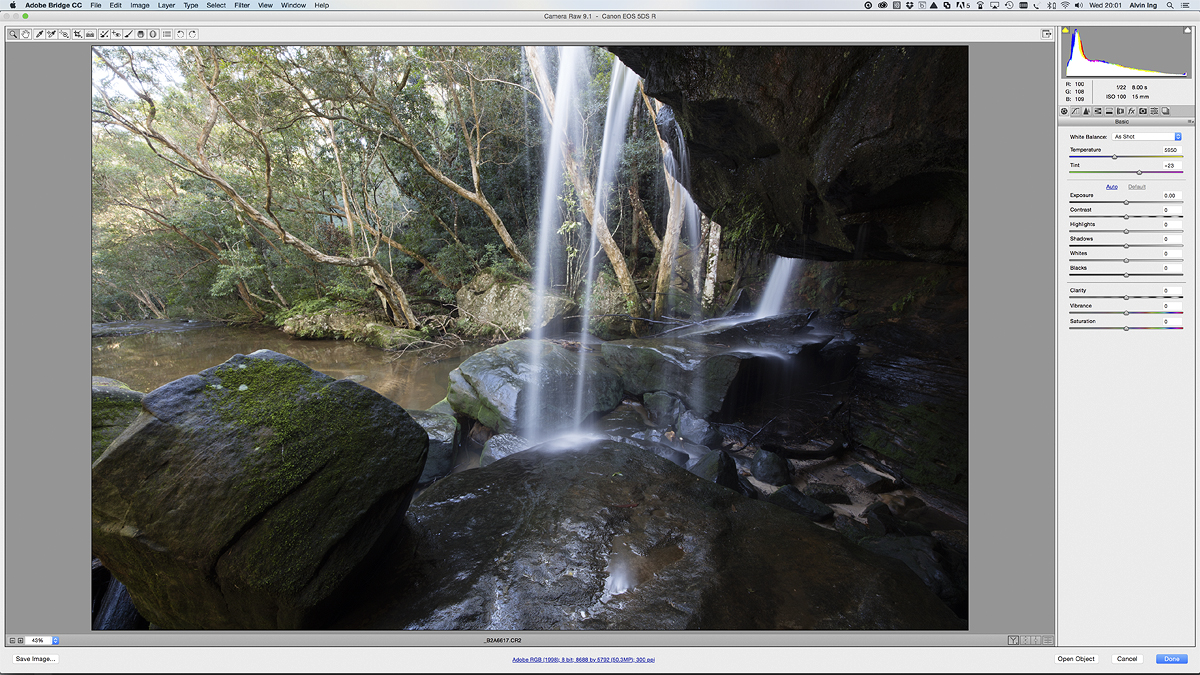 The second image shows 100% recovery of highlights and pushing shadow details to 100%. This was performed for this exercise only, and we generally never go to these extremes. 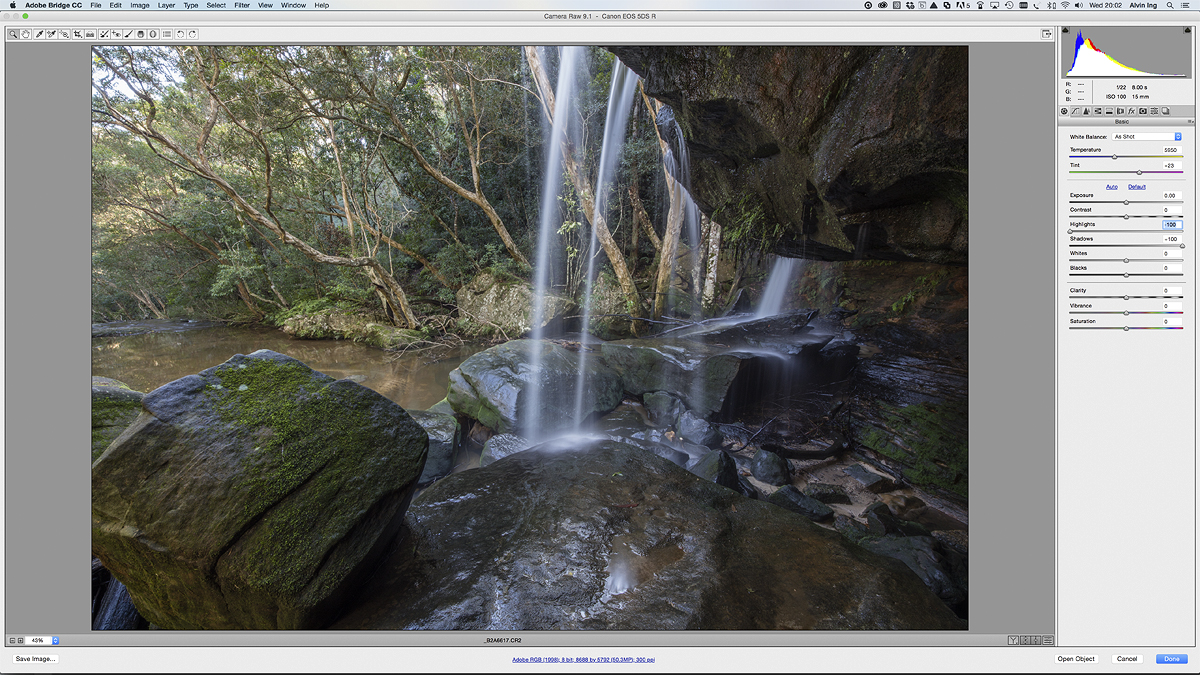 The third image is a 100% view (on an iMac retinal screen) of the shadow detail that has been pushed to 100%. In other published examples on the web, such as from the On Landscape link above, this resulted in significant noise, including colour noise. This is not evident in our example. In fact, the shadow areas are surprisingly clear and free of noise. 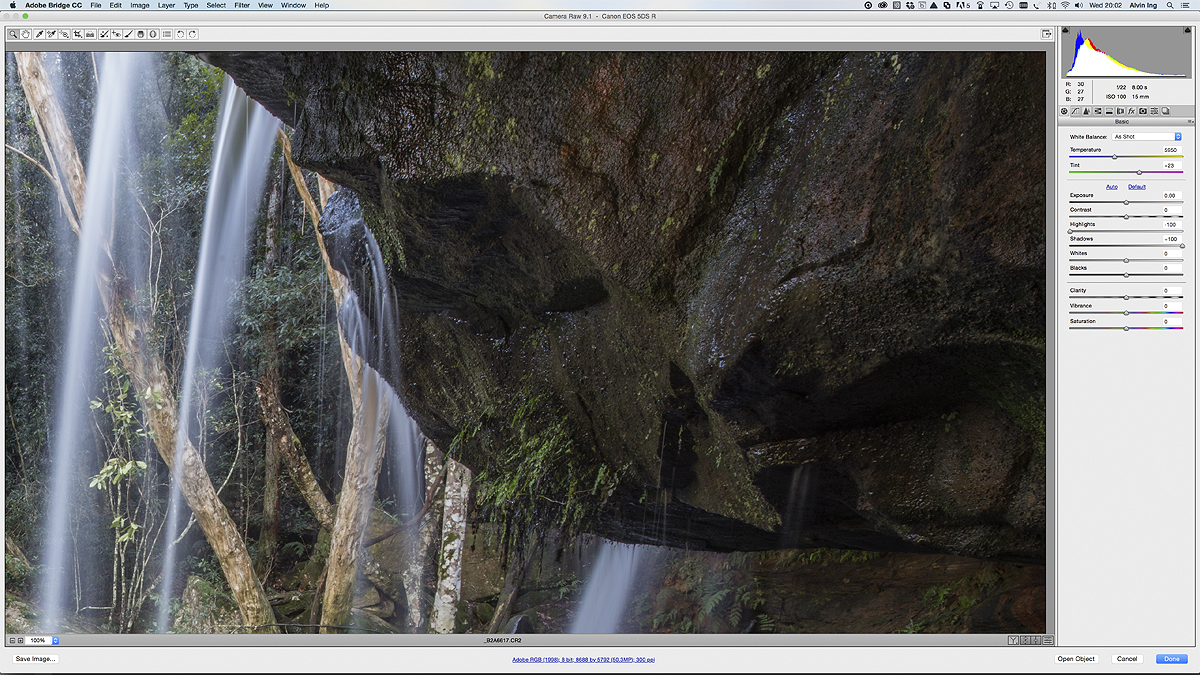 Our conclusions are that the so called lack of dynamic range in Canon sensors, and the potential poor recovery of shadow details, are unlikely to affect the way we shoot our landscapes. The 5DSR is not technically limiting our images, and we can’t see the advantage of upgrading the A7R to the A7R II, when Canon now has a 50.2 megapixel camera that allows us to easily print big without resorting to Perfect Resize etc.

The below image illustrates the relative size of the images from the cameras we have been discussing.

Overall, for Landscape Photographers, the 5DSR we feel is a marked upgrade to current offerings, particularly if large prints is an end result of your work. The detail and resolution are extraordinary, and is noticeably superior to the 1DX image upscaled to the same size using Perfect Resize. We will still be using the 1DX for sport and particularly motorsport, but the 5DSR is now our go to body, for virtually everything else.